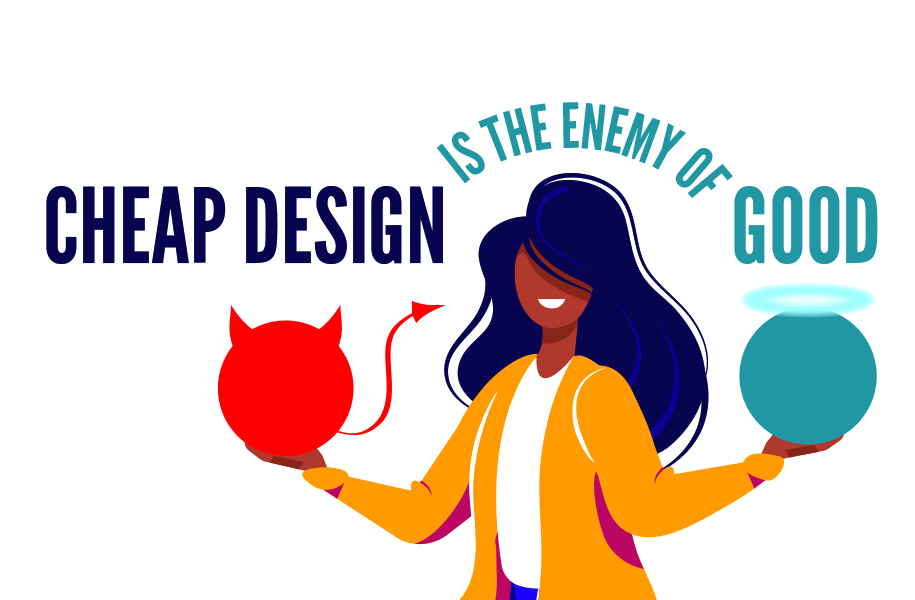 I generally believe you get what you pay for. I’ve found over the years when I try to save money by buying the cheaper version of something (like the inexpensive suitcase that had a zipper malfunction the first time I used it), it falls apart pretty quickly and needs replacing much sooner than anticipated. So if I’d just spent a little more on the quality product up front, I’d have saved money in the long run and been a lot happier with my choice.

Design is that way, too. I got a call last week from someone who purchased a new logo from one of those quick-turn logo companies—post your job for free, get lots of people to submit designs, and give a couple bucks to the winner. He was happy enough with the logo he chose, but had a big problem: the designer only gave him a tiny jpeg file, which didn’t work when he tried to upload it to social media and was useless on his packaging. He also wanted to make a few minor changes, which wasn’t allowed through the company he used. So he found me on Google and asked for my advice.

I’ve heard that story before. People think they’re saving money by getting something done on the cheap, only to find out it’s completely unusable or not exactly what they needed, forcing them to pay more to get it fixed or redone. I understand the design process likely isn’t intuitive for folks who are just starting out, and the lure of “free” is hard to resist. And I also understand that not everyone can afford to spend a lot of money when they’re just starting out. But a little bit of research and asking questions can really go a long way to figuring out the actual costs. Spending money to fix something might actually be more expensive than paying to do it right the first time.

Luckily in this case, the logo he got was pretty simple. I was able to redraw the logo as an Illustrator EPS, make the changes he wanted, and give him the full slate of logo files in various formats in just a few hours.

Have you ever skimped on a purchase and regretted it?

I learned the hard way, too.

The past has taught me that mistakes are costly. In fact, it’s one of the 16 lessons learned during my 16 years in business. With age comes wisdom, right?

How can we help communicate your impact?

Get our (very) occasional newsletter and keep in touch. No spam—we pinky swear.