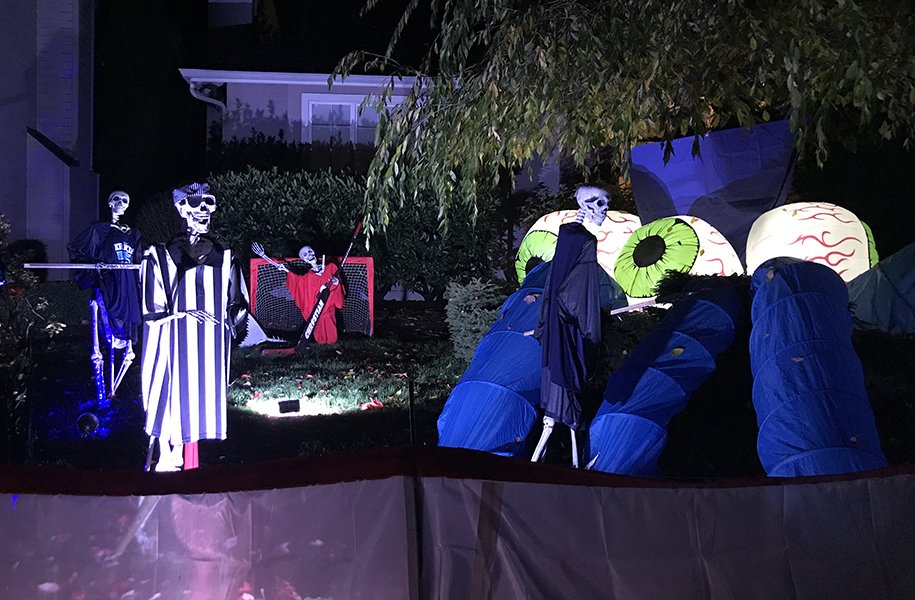 Seattle has a new NHL team this year: the Kraken. As a hockey fan, and a fan of really good design, I’m all in (I LOVE the logo). So when Halloween rolled around, it seemed only fitting that our sea monster would become the Kraken she was always meant to be, and we set up a hockey rink in the front yard.

There’s been a lot of buzz about the new team, games in the new arena are sold out for the foreseeable future, and people are wearing Kraken gear all over town. So the decorations would be a big hit with the neighborhood, right?

You see, Seattle is obsessed with football…the Seahawks logo is EVERYWHERE. I have yet to enter a store that doesn’t have Seahawks paraphernalia prominently displayed, and I think we’re the only house in the state that doesn’t wave a 12th-Man flag year-round or have a full set of team jerseys in the closet. I’ve never seen anything like it.

So our Kraken decorations really struck a chord with hockey fans in the neighborhood. The people who love hockey loved the yard, and we connected in a meaningful way with some great people.

The football fans on the other hand, particularly the kids, had absolutely no idea what our decorations meant. When my husband told a group of kids to take two candies or they’d go in the penalty box, one kid actually thought we were going to put him in a box. The Kraken player checking his opponent into the boards and the guy in the Sin Bin (the two things the hockey folks appreciated most) were totally lost on the football fans. To them, our yard was just a bunch of skeletons in big shirts waving funny looking sticks around.

What the Kraken taught us about marketing

The evening was a great reminder about messaging. If your intention is to speak to the largest audience possible, make sure you’re speaking their language. Keep the jargon to a minimum, and use themes and imagery they’ll understand and connect with. If your intention is to speak to a smaller, targeted group of “your” people, then play up the inside jokes and the small details they’ll appreciate. You might not grab as many folks with a more targeted message, but the connections you do make will be a lot stronger.

Let me help you find your just-right audience

If you need help reaching out to your audience (or making sure you’re speaking to the right one), reach out. I’m happy to show you how to connect with those “just right” people.

How can we help communicate your impact?

Get our (very) occasional newsletter and keep in touch. No spam—we pinky swear.